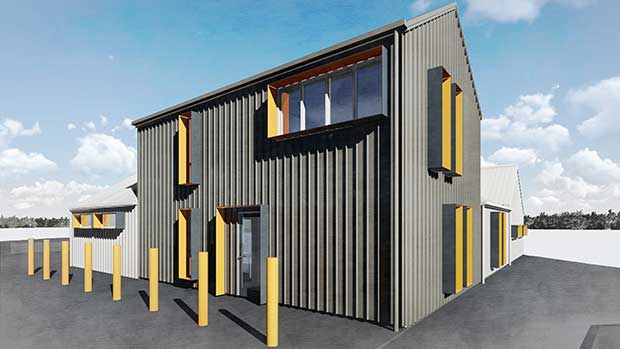 Autonomous Underwater Vehicles (AUV) are robots that can be programmed with missions and behaviors to perform tasks such as making charts of the seabed, collecting information on seawater and other data that help us to understand the undersea environment. AUVs are used by earth scientists, defence departments and commercial companies.

The AUV Facility is located in a specially constructed building on the Newnham campus. The facility needs a large space to house the Antarctic Gateway Partnership AUV, which was delivered in early 2017. The AUV Facility is home to a few other AUVs too and hosts researchers from across UTAS and partners in Australia and around the world.

The Gateway AUV has been designed to be capable of operating in some of the most difficult marine conditions on earth, including beneath floating ice shelves. The vehicle can dive to 5000m deep and travels at speeds between 1.5 - 2.5 m/s.

The Gateway AUV was acquired as part of the $24 million Antarctic Gateway Partnership, a Special Research Initiative of the Australian Research Council that aims to provide new insights into the role of Antarctica and the Southern Ocean in the global climate system.

The AUV Facility has  a Kongsberg Remus 100 vehicle, with an advanced sensor suite. This is a partnership between AMC, AMC Search and a commercial partner. This smaller vehicle is much easier to deploy and available for commercial survey. This AUV is a key component in AMC Search’s AUV training courses it provides to the Navy.

What is the future for AUV’s?

AUVs will begin to take on more and more of the tasks that are performed by ships, particularly the monitoring the ocean. The next big steps to be made are in integrated sampling and infrastructure systems. AUVs will work together to communicate in more challenging environments by acting as gateways to each other and passing data from the subsea to research networks. Defined standards in subsea docking for charging and data transfer will allow AUVs to be persistent observers in the ocean with minimal environmental impact. The developments that we see in AUVs over the next decades will also make their way to robots exploring extra-terrestrial environments such as the oceans of Enceladus and Titan (moons of Saturn).