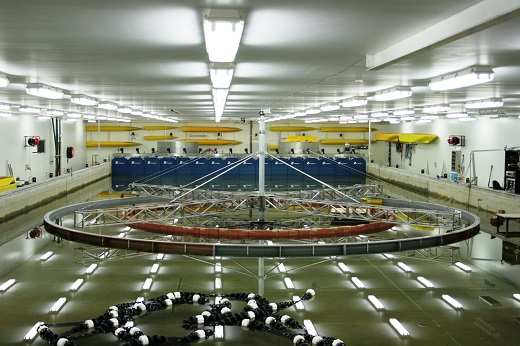 It is used by students, research organisations and industry to conduct a wide variety of experiments, providing hands-on experience and opportunities for experimental modelling.

The Model Test Basin has a wave-maker with 16 computer-controlled piston-type paddles that can produce a wide variety of waves at almost any finite water depth.

A wind generator with 20 individually controllable fans can be strategically positioned to obtain the desired wind direction and strength.

A state-of-the-art Qualisys digital video motion capture system consisting of a minimum of 8 and maximum of 16 cameras provides the ability to track all six degree-of-freedom motions for multiple floating models.

Semi-captive models can be towed at prescribed speeds up to 3.8 metres per second.

We have a range of multi-degree-of-freedom force balances available for use, including a large one that can be located in a pit beneath the concrete floor of the basin to measure the wave loads on structures sitting on the sea bed.

Laser diagnostic tools, such as Particle Imaging Velocimetry (PIV), can be used to quantify water flow in/around objects (we custom-make our own neutrally buoyant fluorescing particles to suit the experiment).

The facility is very versatile and can be configured to investigate a wide range of maritime hydrodynamic problems. For example: Howe to turn waves into energy