A career change prompted by a desire to see greater use of renewable energy.

“The goal of my future work will be to contribute to the development of new technologies that apply to the offshore renewable energy, wider offshore and underwater industries.”

Mr Gubesch has been awarded the Laurie Prandolini Research Fellowship through the Institute of Marine Engineering, Science and Technology (IMarEST), and will use the $14,000 grant to continue investigating the effect mooring systems have on the performance and survivability of floating offshore wave energy converters which he is conducting at the Australian Maritime College.

The fellowship was established to honour Laurie Prandolini, who made an outstanding contribution to the maritime community in the Australia, New Zealand, and South Pacific region. It provides an annual grant to a doctoral candidate or postdoctoral researcher in the marine engineering, marine science or marine technology domains.

Mr Gubesch’s interest in marine engineering and renewable energy began in 2008 when he was the Principal of a small primary school in northern Australia. He was astonished to learn that the remote town where he resided (pop. 150 people) relied solely on diesel generators. The potential of generating electricity from the marine environment for remote and isolated communities inspired him to make a career change. In 2015, he relocated with his family to Tasmania to his Maritime Engineering study at the Australian Maritime College (AMC).

During his studies he became captivated with generating electricity from ocean waves, particularly in the context of Australia’s enormous coastline and fantastic potential for offshore energy resources.  Now well into his PhD, he is investigating the effect mooring systems have on the performance and survivability of a floating wave energy converter (FWEC).

“Generating renewable energy from ocean waves is a fascinating concept. However, there are many challenges in designing a wave energy converter that can consistently produce energy while mitigating the risk associated with a severe storm like a tropical cyclone or low-pressure system.

The moorings are an important component for floating wave energy converters as they have a significant impact on the amount of energy that the device can absorb and are solely responsible for station-keeping during extreme weather events.” He explains.

Three key aims of the research are:

Upon completion, it is intended that this work will provide industry and research organisations with recommendations for moorings that find a balance between increased energy production and survivability in extreme conditions.  Additionally, the methodology for modelling extreme sea states is intended to contribute to advancing survivability analysis across the wider offshore and subsea industries.

Acknowledgements from Mr Eric Gubesch to IMarEST and Greg Hellessey for supporting the research with the Laurie Prandolini Research Fellowship, and to PhD Supervisors Dr Nagi Abdussamie, Prof. Irene Penesis and Dr Chris Chin for their support and direction. 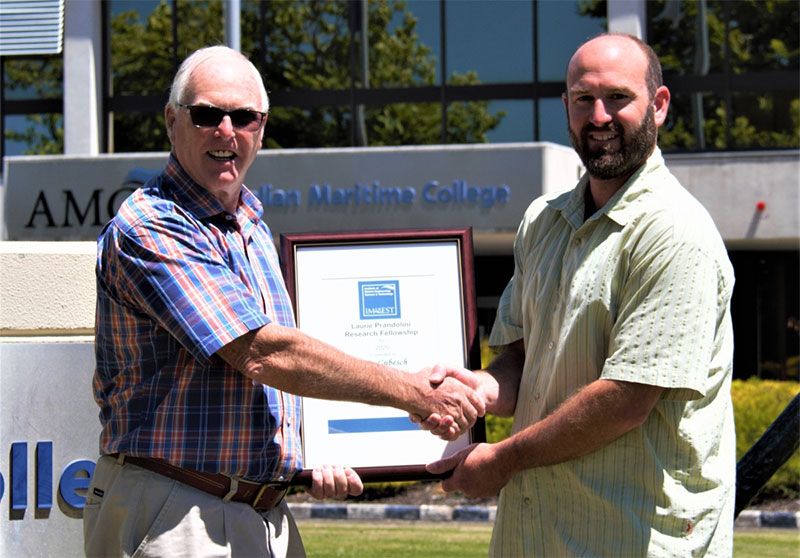