Industry 4.0 and implications for the maritime workforce

Home  /  About AMC  /  News & Events  /  Industry 4.0 and implications for the maritime workforce

When plans to build the world’s first fully autonomous container vessel, the MV Yara Birkeand, were first unveiled, opinions varied as to whether the project would give way to an autonomy of things revolution in maritime.

Rolls-Royce’s Oskar Levander took an optimistic slant famously remarking, “This is happening. It’s not if, it’s when. The technologies needed to make remote and autonomous ships a reality exist… We will see a remote controlled ship in commercial use by the end of the decade.”

But two years later and Maersk’s Søren Skou said, “I don’t expect we will be allowed to sail around with 400-meter long container ships, weighing 200,000 tonnes without any human beings on board […] I don’t think it will be a driver of efficiency, not in my time.”

Meanwhile, International Maritime Organization (IMO) Secretary-General Kitack Lim warned that regulators are cautious about an autonomous future, claiming that autonomous shipping technology will be ready before regulators are.

Although it may be true that regulation is yet to keep up with the fast pace of maritime innovation, few can deny the benefits that AI and interconnected (IoT) devices bring to the sector.

Once operational, the Yara Birkeland, will improve the industry’s carbon footprint, reducing diesel-powered truck haulage by an estimated 40,000 journeys a year.

There are also safety benefits to consider, with research finding that human error is responsible for most coastal vessel accidents in harbours.

Meanwhile crewless vessels could halve the operating costs of a cargo ship, eliminating expenses such as salaries, insurance, victuals and repatriation.

Amid all of the excitement new technologies bring to the industry, however, comes equal measures of concern.

With algorithms replacing intuition, automation replacing skill, and sensors replacing vigilance, many are left wondering what the fallout will be for the maritime workforce.

To what degree – if any – will humans be needed for the ships of the future? If human ship operators are needed, what key skills should we be cultivating as we enter into these unchartered waters?

Prashant Bhaskar, Director of the Australian Maritime College National Centre for Ports and Shipping (NCPS), believes technological disruption will be rife and pervasive, but remains optimistic about the future for shipping staff. He says changes in hiring, training and organisational modelling will be needed to weather the paradigm shift.

“Similar to many other industries, the maritime industry is transitioning to Industry 4.0, with crew-less remote-controlled and autonomous ships getting closer to operational reality. However humans will still be needed to manage their operation,” Bhaskar said.

“Despite the prevalence of machines and automation, humans with emotional intelligence will remain central to the efficient operation of the maritime industry.”

In support of this view, the Maritime Safety Committee at the International Maritime Organization (IMO) has identified four degrees of ship autonomy.

In degree 1, a ship has automated processes and algorithmic decision support, but onboard crew members are still needed to operate the systems (albeit with less supervision).

In degree 2, ships are controlled remotely, but still with onboard crew members.

In degree 3, ships are controlled remotely with no seafarers on board; and in degree 4, the ship is fully autonomous.

Assuming the industry undergoes a gradual evolution, it may look something like these four stages – with varying degrees of digital literacy and soft skills required at each.

However, with the Yara Birkeland – a degree 4 example – almost operational, an outright revolution which fast-tracks straight to degree 4 is equally plausible.

Regardless of how the transition takes shape, Bhaskar believes the same core skills should be prioritised for immediate hiring needs.

“Digital literacy is a critical driver for technological advancement and to thrive in a digital landscape, generally. However, there should be less emphasis on digital literacy as a knowledge-based asset, rather an aptitude-based one,” he said.

“Very few people will have expertise on all software platforms used in maritime operation – particularly at the rate the sector is evolving. To this end, maritime organisations should look to recruit people that are comfortable using technology, have a willingness to learn, along with a number of identified soft skills,” he added.

To identify which soft skills would be most advantageous, Bhaskar and fellow researchers at NCPS, surveyed 117 senior managers in the onshore maritime industry in Australia, the US and Canada.

They found that communication was the most important employability skill, followed by problem solving, adaptability, self-management, team work, and digital literacy. Importantly, in ten years’ time these requirements would remain largely unchanged, the study found.

“Our research shows that, ten years from now, communication and adaptability will still be recognised as the most important skills,” Bhaskar said.

“Regardless of changes in the future, adaptability continues to be an important skill. It is a continually evolving industry that will require graduates to be agile in their approach to the ever-changing environment.

“A skills focus for maritime business graduates will not be creating the technology itself but in the use and management of technology, computer skills, and data management (e.g. big data) including monitoring, analysis, problem detection and solving,” he concluded.

Professor Prashant Bhaskar is due to speak at the flagship IHMA Congress – held as a virtual event on 5-9 October 2020.

He will discuss relevant research findings in more depth; open up debate on how the autonomy of things revolution is shaping up from a technological and regulatory perspective; and explore how these changes may impact hiring and education for the maritime sector. 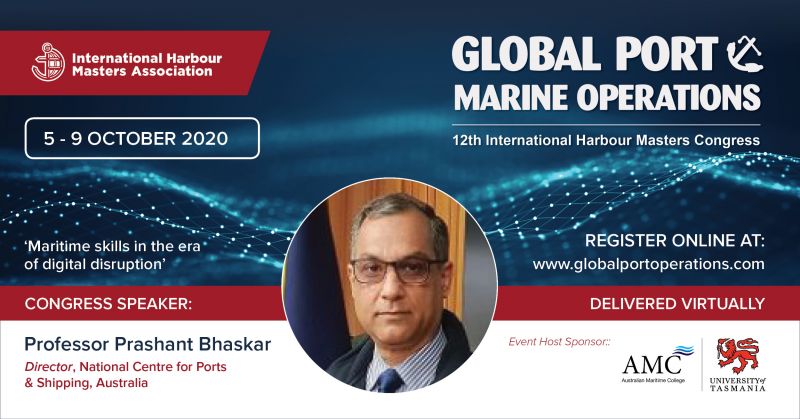