Under the supervision of Shantha Gamina Jayasinghe and Hossein Enshaei Monaaf won the first place for best research poster from 281 other researchers, achieved an outstanding result in students' evaluation for his teaching style at AMC, published high quality articles in reputable journals and completed original research into power options for the Bruny Island ferry service for his PhD.

Monaaf, 28, originally came to AMC from Sydney in July 2016 to undertake a Masters degree.

But such was his drive that he was soon upgraded to a PhD on “Power Optimisation of Hybrid Power Systems for Electric Ferries”.

Already the PhD has received 102 citations in other publications for its conclusions on the best solution to cut noise, costs and diesel emissions from the ferry service.

Monaaf will take up a position with Energy Networks Australia just weeks after submitting his PhD  thesis.

He was originally from Iraq but his schooling was in Oman before doing a Bachelor of Electrical Engineering in Malaysia.

He was working in Sydney as an electrical estimator when he heard about Tasmania and AMC from friends.

He published two papers in the first nine months of his masters including in the influential Energy Conversion and Management journal.

He published two papers in the first nine months of his Masters including in the influential Energy Conversion and Management journal.

He then did a confirmation of candidature and was upgraded from a Masters to a PhD and was awarded a full scholarship from the University of Tasmania.

Monaaf lectured from 2017 in subjects such as marine electrical powering and systems.

“Once I finished that teaching I received a commendment letter from University of Tasmania Hobart for my contribution to enhancing the quality of teaching and learning experience at the university,” he said.

“So that was a very good achievement which motivated me more and more and showed I can take up challenges easily.

Monaaf’s research was into noise, fuel consumption  and emissions from the Bruny Island ferry and design of a better propulsion system.

“We went there and did data collection and then we designed a new system,” he said.

His PhD concluded that a hybrid system of battery and diesel was the optimised system in terms of operational cost.

“I did the design for that and the simulation as well and we published about six articles for international conferences from that including a review on hybrid solar and wind renewable energy systems,” he said.

He said removal of diesel equipment from the existing ferry would be less economically feasible than building a new ferry with a battery.

Monaaf said a fully battery powered ferry would take about seven years to get a return on investment for the operator.

Under his recommended fully battery powered system the ferry would travel from Kettering to Bruny Island and return before recharging the battery.

“The load of the Bruny Island (Bowen) ferry is 250 tonnes and the batteries would be five tonnes only so we suggest the charging station be installed at Kettering with access to the Tasmanian grid,” he said.

The renewable nature of the Tasmanian electricity system would mean a total cut in emissions compared with other parts of the world where the battery could be powered by coal or fossil fuel sources.

Monaaf will work as a project officer and coordinator for Energy Networks Australia in Melbourne which is the national peak body representing Australian electricity and gas distribution networks.

One of the challenges of his PhD had been in finding a good laboratory to research electrical systems at the marine oriented AMC.

“With my supervisors we found out how to work with the available resources,” he said.

“My supervisor Shantha and co-supervisor Hossein were very supportive and we found out how to meet this challenge by using simulation rather than experiment,” he said.

“The good thing about AMC is the friendly environment here, all the people are friendly, the staff are easy going so in my opinion that is very important especially for a foreigner coming to a new place.

He liked the system of supervision of candidates at AMC.

“Also AMC gives researchers the opportunity to teach and this is good motivation and financially helpful,” he said.

He said he had been passionate about electrical engineering since high school and his aim is to contribute to the world as an energy sector expert.

“I would like to improve the energy system by integrating more renewable energy and make the world more greener by using these zero emission sources,” he said.

“My aim is to contribute to the place where I live to make it a better community and that will also improve my skills.

Monaaf’s one disappointment about his Tasmanian experience is that he never saw a Tasmanian devil. 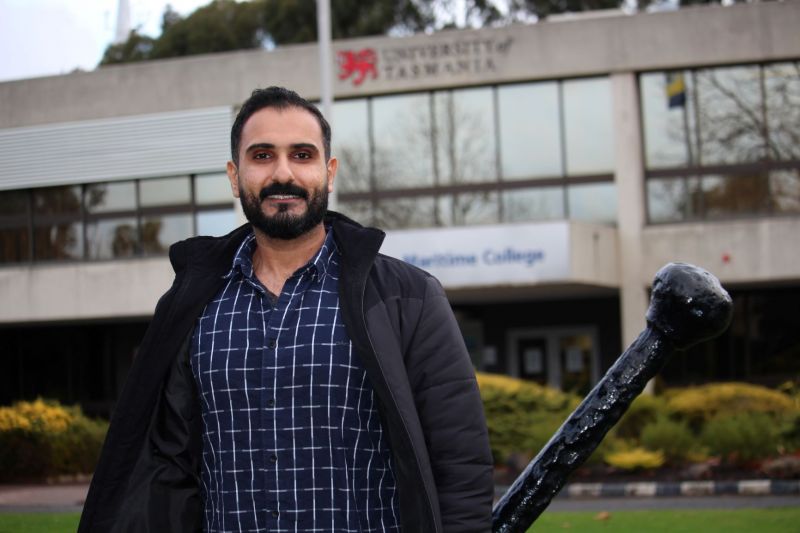